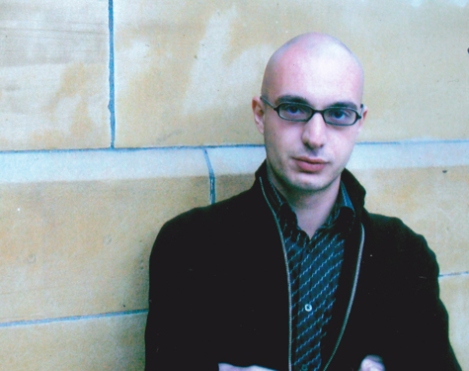 I first met Andreas Marouchos aka Rouchos (pronounced Roo-Haus) at a jam hosted by Westside Wax a few years back.  He was djing techno and soon got me dancing, clapping, hootin’ and hollerin’ with his energetic and proficient 3 deck mixing abilities. Our paths have crossed many times since then and every time we meet again I’m reminded of how passionate he is about techno.

As we weren’t able to coordinate a live studio session on In My Room due to the scheduling conflicts with our radio shows, Rouchos and I chatted via email and he agreed to submit a  kick-ass pre-recorded mix for the show.

Citing techno producers like “DJ Rush, Jeff Mills, Rob Hood, Ben Sims, Dave Clarke, and Underworld” as influences, he started djing in 1998 and since then he has performed at nightclubs and festivals alike on two continents and 8 countries. Nowadays, Rouchos hosts a weekly online radio show in Toronto called “Technique and Style”every Wednesday on www.DJFM.ca at 9pm.

“I’ve used three decks, vinyl and some sort of effects all my DJ life with a brief interruption in 2002,”  he explains, ” I was actually an early adopter of Final Scratch [but] I just found the technology boring because I discovered over time, its more fun if you can pull it off live using wax instead of a computer.”

“Call me a Luddite, but I think putting a laptop between a DJ and a crowd is boring… Don’t get me wrong, I am not against Ableton Live or Serato or all this stuff, but more and more, I see DJ’s just using this setup to perform basic mixing functions rather than use the technology to stretch the limits on what can be achieved.”

“For a while I used Ableton for “canned” DJ Sets. I’d just cut things up to a much finer grade than what I am physically able to do … and in doing so I created something new. Take “Girl Talk” for example – look at what he does with the pop/dance genre. I used a similar technique for a while, to create a new style. Eventually I just got bored of “click and mouse” and went back to vinyl.”

It doesn’t take long before we’re discussing the state of Techno in Toronto: “I’ll tell you one thing about Toronto – in my genre, we truly suck,” says Rouchos.

“I’m not absolving myself of any blame, I take personal responsibility for this as well. But let me ask you this; how many Techno jocks [from Toronto] are truly touring jocks? Like a Peter Van Hoesen who was in the city recently? Or like a Cristian Varela from Spain? The answer is zero….”

“There are a couple of reasons behind this; the liquor and rave laws definitely put a cap on what can be achieved with respect to physical spaces for this type of music.  Also, there aren’t that many of us either [in Toronto] so if [we] produce less its much harder to compete on a global scale. We’re also quite far away from the rest of the world. Oddly enough, Japan has many touring DJs who have achieved success internationally and who are regularly flown from Madrid to Moscow to simply show up and spin wax for 2 hours.”

“[We need] to learn to be a bit more demanding from our “scene” in Toronto. That’s what really disappoints me. We don’t demand more from the DJs, even though we are paying upwards of 20 bucks to go to a “party”. It’s like we’re paying for filet mignon and being served dog food!”

The set below is an hour-long techno workout by a man passionate about his music and who’s no slouch behind the mixer.  “I hope your audience enjoys the set, and it gets their booties shaking…I also hope that they may discover something new. ” Speaking about his mix he adds, “it isn’t “one tune in to the next … rinse, repeat” kind of set. In fact, those kind of sets piss me off. So asking me to play a set for a different audience or channel, enabled me to rehash some old ideas, and put them together in new ways.”

Lovers of techno, you’re in for a treat…