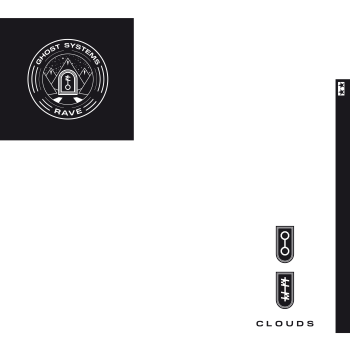 If you don’t know about Clouds then you haven’t been listening to the show. Too bad and that’s on you; luckily I archive everything. Aaaannnyway…

The Scottish production duo’s anticipated debut album Ghost Systems Rave drops via Tiga‘s Turbo label on July 1. The album is a gritty blend of mechanical techno, industrial, experimental and, for the most part, works well as a concept. They’ve done a great job of creating a sonic landscape in which their mechanical and analog-sounding tracks can live, breathe, pulse, throb and shuffle their way along. The album’s sole flaw is that it contains a couple of tracks that I don’t think really fit in. But hey, maybe that’s why Ghost Systems got it’s Rave?

Most of the album is weirdo, experimental, Ghost-in-the-Machine, and Industrial sounding stuff that surrounds the more “dancefloor friendly” (I use this term loosely) tracks. DJ’s, don’t worry about all that experimental and industrial stuff. There’s at least 8 tracks you can play out – provided you know how to work ’em. Maybe it’s their cheeky sense of humour or maybe it’s just dumb coincidence but the 3 you’re most likely to jock are nearly un-fucking-pronounceable! Even if you did drop them to a receptive crowd, how on Earth would you tell anyone!?  It’s also worth noting that the more experimental tracks have been given either a straight-forward name or are conversely named with techno-babble suggesting they will rarely be aired publicly and are destined for headphones.

Do Clouds take pleasure in juxtaposing the accessible with the unpronounceable? Essentially, forcing these tracks to share the same fate as the more headphone or “at-home listening” cuts on the album?

Well, I’m not going to let that happen. Look below for the preferred pronunciation. I’m setting the standard right now. Clouds, please correct me if I’m wrong.

The stream is right here (thanks Resident Advisor!) and you’re a busy person these days so lemme break down each of these for you real quick.  I predict the bolded titles to get jocked the most. What do you think?

1. (9600) 1991 UB – A photocopier recorded on an old cassette tape in a tile room strains and struggles its way to find a friend with  a pounding kick drum groove.

3. Future 1 – Why is this here? A solid enough throwback early rave hyperbreakbeat  complete with pitched pianos but totally incongruent with the album.

4. Uondapaturu – So no one is gonna be able to pronounce this. Here’s how we’re gonna say it to each other alright? Oo-on-da-pat-aroo. Pumping and thobbing techno based around the sound of a Jacob’s Ladder that’s being encouraged by a black-sounding man saying “yeah.”

5.  Roche Lobe (System) – It’s 1993. You finally found a BBS with the free demo of Wolfenstein 3d but after you went to bed your 2400 baud modem had difficulty maintaining the connection for your download. This is the soundtrack of it’s struggle.

6. Uiqwenmokdan – You’re gonna jock this one too. Let’s pronounce this one OoqWHEN-Mok-den. It gets started with simple kicks and the sound of dialing a pulse phone (you know, a rotary phone?) Delayed and lightly distored big beat drives the track along and it picks up accents of hollow-sounding PVC tube percussion and a weirdo pitched vox snippet.

7. Modular Scarf – Bubbling sine pulses sit alongside a straight-forward but gritty and grainy techno beat. Is there an edit yet?

8.  The Rights of Artificial Life Form – A slowed down 2 beat vocal sample (is that disco?)  is slowly layered into a shallow groove before Clouds makes the flip. Neat stuff here. The mechanical swing on this one gives the illusion of organic life as it pulses and breathes.

9.  Skeleton Island – At first, grainy textures and a simple awkward melody that strip away to decayed tape audio of indiscernible human speech. Eventually rejoined by kicks, it limps and throbs to the end. Industrial and spacey, this one reminds me most of late ’90s Nine Inch Nails’ remix albums like Further Down the Spiral or Fixed.

10. Khevsurian – Kev-Surian Ok? Think hydraulics thumping away deep underground that eventually ramp themselves up to become the back beat to a sort of laidback version of  a late 90s tech-trance or psy track (minus the synth leads and cheese).

12. Future 2 – This one starts off more in keeping with the album. It’s a good track and I love the way they make the song throb into existence. Starting out with a Bass or Dubstep-like percussive arrangement, a swarm of metallic bees goad it into a retro-sounding breakbeat to close it out. Still though, why not release this and Future 1 as an EP or as part of another album?

13. Topless Female Nudity – Not as sexy as it sounds. You’re in a space ship and the radiation from a nearby pulsar has scrambled your television. Flicking through the channels attenuates different frequencies and this is what you get.