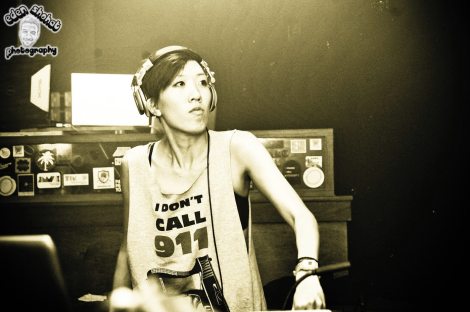 I was introduced to Linguist by Chiclet who booked us both to play at her monthly Nu’D event. A relative newcomer to djing in Toronto, DJ Linguist got her start a couple of years back when she played her first gig at Robb G‘s Reboot Mondays DJ competition.  Since then, she’s been a regular feature at jams like Get Slayed! and Cherry Bomb and Pride Toronto.

As we were both booked to jock at this weekend’s Nu’D event, I asked Linguist to appear on last week’s show. She turned in a kick ass pre-recorded dj mix made using Traktor with an NI Kontrol X1 and CDJs that showcases the techier and higher tempo side of  Disco-flavoured filtered House and French Touch. The set smoothly moves between: Nu-Disco,  filtered House, French Touch, funky Electro-House, big room bassy and techy Breaks (check the interlude of toughness around the 40 minute mark) finishing with some bouncy ghetto-tinged E-House punctuated with a vocal sample that I swear draws it’s inspiration from these 2 enthusiastic gentlemen:

Thanks to Linguist for the guest mix!